In the center of Agios Nikolaos, you can find the lake of Voulismeni, which connects to the sea via a small stream. There are beautiful cafeterias and taverns around the lake, which are brimming with life during the afternoon. An ancient fable says that as far as the lake is concerned, the goddess Artemis and the goddess Athena, used to bathe often in this lake.

There are also 2 more, relatively new, fables regarding the lake. One of them says that it’s bottomless, while the other one claims that it’s connected to the volcano in Santorini! What’s for certain is that the lake is 64 meters deep and at its bottom, there are weapons and vehicles abandoned by the Germans when World War 2 ended, as the French oceanographer Jacques-Yves Cousteau confirmed after his research in 1978.

Furthermore, there is support for the theories that the lake was created after the subsiding of an underground cavern and that it’s the crater of a volcano!

Apart from the lake of Voulismeni, it’s worth taking a walk through the park which is right above it and at the Nearchos square, with the beautiful murals depicting the sea.

Other sights worth seeing include: the archeological museum, the public gallery, the IRIS exhibition, Kitroplatea, the hill of Agios Charalambos and the islands of Agion Pandon and Faros, where the famous Kri Kri live. 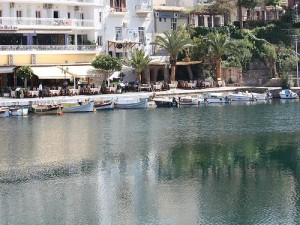