Narrated by mister D.M. Who lived these events as a small child:
In the Monastery of Toplou (Sitia region), during the WW2 and the German occupation in Crete, the monks used to hide the one of the two radios used by the revolutionaries in Eastern Crete. The other one was somewhere in Palecastro village.

The Germans were tipped to the existence of the radio in the Monastery and order the Commander of the German-Italian occupation force of Sitia, at first daylight, to take a regiment to the monastery and execute the 10 monks residing there. The German Commander was relatively nice. In the end, he proved to be against the Nazis. So he went to the port at night and told one of the fishermen he found there: “Go straight away to the Monastery of Toplou and tell the monks to leave, because tomorrow, an execution regiment will come. We know about the radios. Take your boat and go by the sea, to avoid an ambush.” 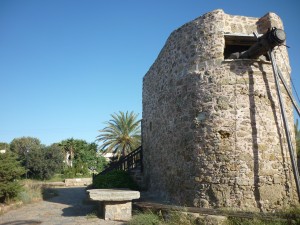 The fisherman then, did as instructed by the German Commander. He arrived late at night to the monastery and the monks were already asleep. He woke them up and explained to them, what the Commander said. Because the fisherman used to drink a bit too much and was clothed in rags, he seemed unreliable. The monks didn’t believe him and sent him away. All but one. He took his blankets and slept in a cave, outside the monastery, by the sea. At dawn, he woke up from the sound of a rifle going off. He carefully climbed the way to the monastery and saw the bodies of the 9 monks, lined up, next to the windmill.

At the location of the execution, there is a monument, nowadays. Entering the monastery, at our left. Next to the windmill…